Category Archives: The power of being still

The Power of being still. 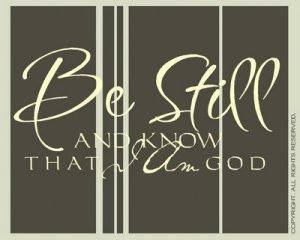 Joshua 6:10, ‘ Now Joshua commanded the people, saying, “You shall not shout or make any noise with your voice, nor shall a word proceed out of your mouth, until the day I say to you shout! Then you shall shout.

This message is followed by narration of an incident that happened a year back; First let me share this incident with you. Getting a parking space in Dubai is an uphill task. Because of this reason, I waited for 20 mins in a parking lot. After waiting for a while, I saw a car moving out. Immediately, I got ready to park my car in that space. But suddenly a local resident came out of no where and parked his car there….I was really disappointed, because I was getting late for the meeting too. But instead of arguing with him, by His grace, I kept calm and didn’t utter a single word. He parked his car in style and he went his way…But the very next second, I found another car moving out and I got the space to park my car…What if I had argued with that local man?…I would have never seen the other parking slot that was kept for me! Being still was the key!

Here is the message. God is transmitting His blessings on us, but we are busy in arguing, murmuring, asking for explanations from God, doubting, being frustrated etc. And all these will not help you. Instead, these will close your eyes to see the provision of God. God wants His people to be still while He is working. Being still doesn’t mean being numb or inactive, but it means ‘putting all your trust in God’. Now many people misquote this. They become totally inactive in all things. If God wants to bless you, you must come out of all your comfort zone. He will never spoon feed you in your zone. He wants you to come inside His zone. As science says “For every action, there is equal and opposite reaction”. Let me put this in biblical way “For every God’s work, there must be a reaction from our side”. If we do not react, then God cannot act. This is a radical statement and many of us don’t apply this. Jesus commanded the servants to fill the empty jars with water. Unless and until they don’t fill the jars, God will not change the water into wine. Jesus asked Martha and Mary to take away the stone. Unless and until they take away the stone, Lazarus cannot come out. Jesus applied the clay on that blind man’s eyes and told him to go to pool of Siloam. Now unless and until this man goes and washes his eyes, he won’t receive sight. See, the word of God has power to heal, bless, and to satisfy, but if it is not sowed in a good ground…this powerful seed will never spring up yielding fruits. When we do the best, God will do the rest. God will not come to you and spoon feed you every time. He does it sometimes, but we must get up and act upon the promise we heard. After every prayer we say amen, but what about after amen? We are busy in our own world. We never act and put our faith on the thing which we prayed for. We go inactive in spirit. So don’t misunderstand. Being still does not mean ‘being inactive ….’.Yes, our flesh must be inactive but out spirit must be active. In other words instead of murmuring, doubting and complaining we must trust, love and praise.

What was the weapon that made the huge wall of Jericho fall? Yes, the presence of God (the ark) was with them. They blew the trumpet…That’s right but it was the silence of the people that allowed God to pull down the wall of Jericho. See, the ark of God, which was His presence, was with them. What if the people opened their mouth and started murmuring and doubting?? God would never perform His work. If you see the ministry of Jesus in the house of Jairus, He didn’t take everyone into the house. He took three disciples and the parents of the dead girl. In other words, he cast out the doubters and complainers , and took in the five people who shut their mouth but believed in Jesus . Amen!..Jesus could not perform miracles in His own town because of doubters.
We see that Jesus took one blind man out of the town and healed him… God is telling me that there are some people who believe in the work of God, but are in the midst of doubters. Don’t worry ! God is going to take you out of those people and heal you…Peter could walk on the water, because he got out of the boat. He saw that it was better to walk on water with Jesus, instead of staying with fear and doubt in the boat.Are you still inside your boat with fear and uncertainty rolling around? Then, get out of your boat and walk on water…walking by faith by looking unto Jesus is better than sitting in the boat with no Jesus.

Israelites marched around the wall of Jericho for seven days in silence, even though their physical eyes said, “ Jericho is huge, and mighty”. They did not open their mouth and utter doubting words…and so on the seventh day, when they blew the trumpet, Jericho wall fell down…They didn’t use any weapons. It was their silence that was used as His weapon. We are serving a limitless God. So don’t limit our God with doubts and murmurings ! Amen!

If you come across the life of Joseph, God took him out of his father’s house. His brothers hated him. He went through lots of hardship in 13 years, but he never argued, doubted or was frustrated by anything that was contrary to the promise. Don’t think that everything will be on your side when your hear the promise. Things will be contrary to the promise, because devil doesn’t want that promise to be fulfilled in your life. Devil cannot touch the promise of God, but he can touch the person who is carrying the promise of God…Remember Abraham and Sarah. The devil could not touch their promise but he touched their mind…by bring in a thought , Genesis 16:2 , ‘And Sarai said unto Abram, “Behold now, the LORD hath restrained me from bearing: I pray thee, go in unto my maid; it may be that I may obtain children by her.” And Abram hearkened to the voice of Sarai.’ Did God tell her this??? NO! Then who told her that ? Had the Lord restrained her from bearing? It was the devil who touched her mind. She uttered a doubting word and so, the promise was delayed…amen! Now did you understood as to why the promising is delaying? It’s not the problem of the prophet, but the problem is in you! Examine and rectify.

Joseph did not open his mouth. So God opened his mouth for him. Amen! At a time two people cannot talk ….You be still and let God talk.

2 Comments | posted in The power of being still